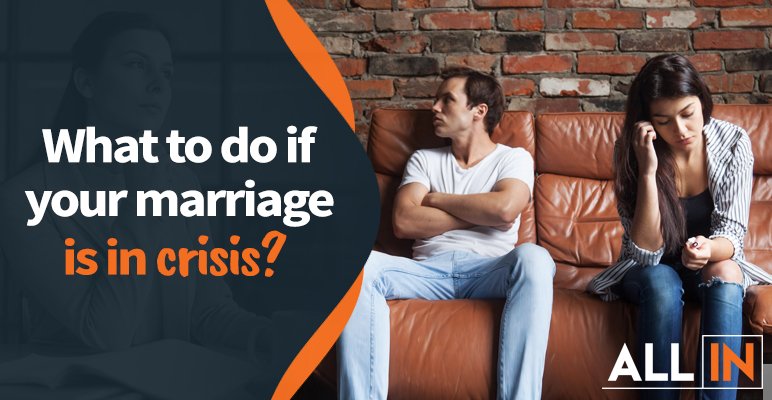 What To Do If Your Marriage Is In Crisis…

The latest data from the United States Census Bureau states that the national marriage rate is 16.6 per 1,000 women, and the divorce rate is 7.7.

Both the marriage rate and the divorce rate have decreased over the last few years, but there’s still a significant number of couples separating. This is especially noteworthy when you consider the fact that fewer people are getting married altogether.

For most couples, the road to divorce starts with some kind of marital crisis (or perhaps a series of marital crises). A lot of divorced couples don’t even realize they’re experiencing marital problems when they first arise, though.

For those who are questioning whether or not they’re going through a crisis, some important questions about marriage problems are answered below. This information can help couples to recognize when a crisis is occurring and decide what they should do to stop or prevent it.

What are examples of marital crisis?
What are things I should do to prevent a divorce?
How does it feel to be in a marital crisis?
How do you know if your marriage can survive a crisis?

What Are Examples of Marital Crisis?

The American Association for Marriage and Family Therapy explains that every couple experiences marital difficulties. However, when these difficulties lead to profound disappointment, discontent, and doubts about whether or not the marriage can last, they spill over into marital crisis or marital distress territory.

An example of a marital crisis might be one major event, like an extramarital affair or an ongoing issue like addiction or substance abuse. Some other examples include the following:

Every couple defines “marital crisis” differently. What might be an earth-shattering matter to one couple might be a small bump in the road for another.

In general, though, marital crises follow a similar pattern.

After a disappointing or distressing event occurs, the couple experiences a breakdown in communication. Over time, this breakdown worsens and the couple begins to argue more frequently. They may also find themselves feeling contempt for one another, being overly critical, or being defensive.

Eventually, poor communication tends to give way to a lack of intimacy, and the couple finds themselves trapped in an unhealthy pattern from which they can’t break free.

What Are Things I Should Do to Prevent a Divorce?

Divorce has serious financial and emotional ramifications for everyone involved. Separation doesn’t just affect the two partners who are splitting up, but it also impacts their children (if they have any).

The American Academy of Child and Adolescent Psychiatry states that children of divorce are more susceptible to both physical and mental illnesses. Children may also misinterpret the cause of the divorce and assume that they are to blame, particularly if the divorce is not handled amicably and carefully.

For couples who aren’t ready to throw the towel in and seek a divorce just yet, the good news is that there are lots of steps they can take to protect their marriage and overcome the current crisis they’re facing.

The following are some of the most effective strategies couples can try:

Dr. John Gottman, relationship expert and founder of The Gottman Institute, suggests that one of the most important things couples can do to prevent divorce is to change the way they address problems.

Rather than using “you” language (“you never come home when you say you’re supposed to”), partners should work to use “I” language (“I feel worried when you come home late and don’t call”) when having discussions. This kind of language helps the other person feel less defensive and makes it easier for them to be more empathetic.

It’s great for one partner to send texts or share on email what they love about the other person in the relationship. However, nothing trumps physical affection and touch.

According to this study published by Psychosomatic Medicine, physical touch increases the production of oxytocin. Oxytocin is a hormone associated with calm feelings, reduced stress, and closer bonds.

Increasing physical touch between partners (this includes hand-holding and hugging, not just sexual intimacy) can help to strengthen the relationship and rekindle forgotten connections.

It’s easier to overcome a marriage crisis if a couple is regularly experiencing good times together. When partners make an effort to spend quality time together (genuine quality time, not sitting on the couch staring at their respective phones), they have a chance to reconnect, share what’s on their minds, and feel more in tune with one another.

Through his research, Dr. John Gottman has found that 69 percent of conflicts in marriage never get resolved. Working with a marriage counselor can help couples to address the conflicts that are holding them back, get to the bottom of what’s causing them, and create solutions for the future.

When in a State of Crisis, working with a trained and experienced Couples Counselor can significantly improve changes of preventing an unnecessary divorce.

Not all couples may be ready or willing to do Couples Counseling, but they don’t necessarily want to divorce. For couples whom are considering divorce but are also considering seeing if the relationship can work, participating in Discernment Counseling may be beneficial.

Discernment Counseling is not Couples Counseling. It is a short term decision making process, lasting anywhere between one to five sessions, with the goal of having greater confidence and clarity about the future of the marriage, based on a deeper understand of what brought them to the point where divorce is on the table.

How Does it Feel to Be in a Marital Crisis?

Put simply, it doesn’t feel good for anyone to be in a marital crisis.

Marital crises have significant effects on both partners and often result in feelings of sadness and worry. Many people who are dealing with severe marriage difficulties develop mental health conditions like anxiety and depression.

These negative feelings can also impact one’s physical health if they go on for too long. Both depression and anxiety have been shown to have serious physical consequences.

According to this article published by Primary Care Companion to the Journal of Clinical Psychiatry, the list of the physical symptoms one might experience includes the following:

Some people might not realize at first that their symptoms (both physical and psychological) can be attributed to their marital challenges. Working with a relationship expert or counselor can help them to identify the source of the symptoms and work to find relief.

How Do You Know if Your Marriage Can Survive a Crisis?

It’s not always easy to tell whether or not a marriage can survive a crisis and is worth saving.  Opinions from family and friends aren’t always good indicators, but many people find that they struggle to trust their instincts, especially if they’ve been struggling for a long time.

For couples who are on the fence about whether it’s worth it to fight for their marriage, the following are some of the most important signs to watch for: