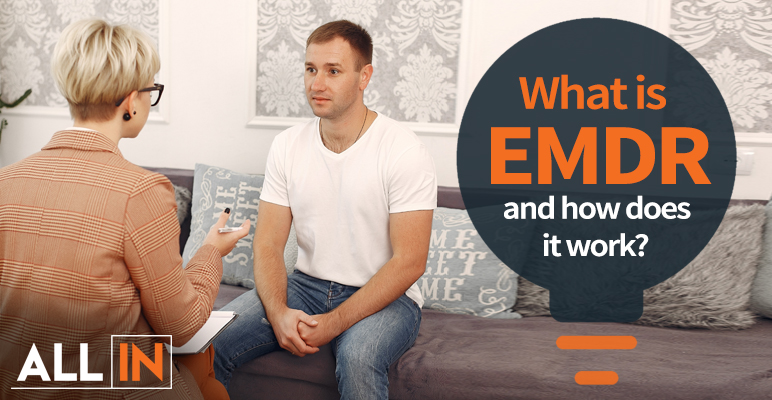 What is EMDR and How Does It Work?

What is EMDR and how does it work?

Eye-Movement Desensitization and Reprocessing, or EMDR, is a highly effective, safe, and cost-effective method for people whom are looking for healing from a psychological trauma in their past. Considered by many to be a cutting-edge approach to treating mental health, EMDR is quickly revolutionizing how therapy is done.

What does EMDR stand for?

This treatment technique has this name because when EMDR was first developed, a primary tenant of EMDR involved having a person move their eyes back and forth while visualizing events in their past.

Since then, various other techniques that do not involve direct eye movement have been developed to garner the same effect and results. So, EMDR is a bit of a misnomer today as it implies eye movement is a required part.

What exactly is EMDR?

EMDR is a technique used by healthcare professionals, mostly therapists and counselors, to assist people in the resolution of past trauma. EMDR is a form psychotherapy used to target and heal traumatic memories one has.

Either as a standalone treatment, or used with other therapy techniques, EMDR is a treatment modality aimed at assisting people in overcoming psychological trauma.

Dr. Francine Shapiro is credited as the founder of EMDR and has been at the helm of guiding EMDR research over the decades.

What is EMDR used for?

Everyone has experienced some psychologically traumatic event in their life (from something mild like being embarrassed in front of colleagues to severe such as being sexually assaulted). Your brain also has a mechanism that “heals” the impact of a traumatic event.

This healing is a process your mind goes through so that the visceral feelings attached to a traumatic event get removed. Then, when a memory gets stored in your long-term memory, it is simply a memory but is not one that carries with it a strong sensitivity, reactivity, nor influences much of your current behavior.

However, your brain is an imperfect system, and some memories slip through the “healing” process. Some memories are just so intense that not all of what needs to be healed gets healed before that memory gets sent to long-term memory storage.

Thus, a memory of an event becomes unresolved. This means that when recalling that memory also lead the person to feel some of the same feelings they felt during the traumatic events.

For example, if someone had an unresolved memory of watching a parent die, when recalling that memory, they still may feel intense fear, helplessness, and emotional pain.

This differs from a resolved trauma. For example, let’s say that same person was also in a severe car accident in their teens. Yet, when they recall that memory they do not have the same feelings of fear or panic (though it certainly is not a pleasant memory).

“The speed at which change occurs during EMDR contradicts the traditional notion of time as essential for psychological healing.”

How does EMDR work?

EMDR uses your brains natural healing mechanism to target and reprocess traumatic memories so that the person finds resolution from the past trauma. This resolution frees the person so that they are not still acting from unresolved trauma, they no longer experience a retriggering of past memories, and improve in their overall mental health.

A participant goes through 2 or more sessions, though usually not more than 10, to identify, reprocess, and resolve past trauma through a series of discussions, visualizations, bilateral stimulations, and other exercises.

The hallmark of EMDR is the use of bilateral stimulation, or an activation of the left and right hemisphere of your brain. This can be done with alternating tapping on one’s knees, looking from left to right, holding buzzing paddles, or listening to sounds in a set of headphones.

In many respects, it depends on the person, the severity of the trauma, and the overall mental health of the participant. Much of EMDR therapy is similar to general talk therapy where it is a guided discussion with a therapist. However, there is also a very unique part of EMDR that differs than talk therapy. That part is usually what people are most interested in.

That part of EMDR can be described as a blend of visualization, meditation, and lucid dreaming. It is common that a participant of EMDR will experience a flood of emotion. While in the hands of a trained EMDR therapist, any participant is safe and protected, it is important to note that reprocessing traumatic memories involves remembering vivid and painful experiences. This can be temporarily scary, triggering, and overwhelming.

The EMDR therapist and the participant works together to make sure that comprehensive healing happens while not also going beyond what the client can handle in the session.

Sessions end with the client returning to a general state of normal so that the client is not destabilized or overwhelmed.

Many people leave sessions feeling just fine, many people feel a little “out of it” and quiet, and a small minority of people can feel deeply affected and uncomfortable.

Any participant of EMDR should have a good and trusting relationship with their EMDR therapist to ensure the safety and health of the client.

Is EMDR an effective treatment?

Decades of research has validated EMDR to be an effective and safe treatment technique. Practitioners of this model follow a well-developed Clinical Practice Guideline, and many mental health scientists have conducted hundreds of studies of this technique showing it’s effectiveness for a variety of mental health concerns.

EMDR is currently widely used for thousands of clients in various hospitals, clinics, institutions across the country. Large and highly respected organizations such as the American Psychiatric Association, The Department of Defense, The Department of Veterans Affairs, and the American Psychological Association deem EMDR to be a “gold standard” model for treating trauma victims and others with traumatic experiences.

What are the 8 phases of EMDR? 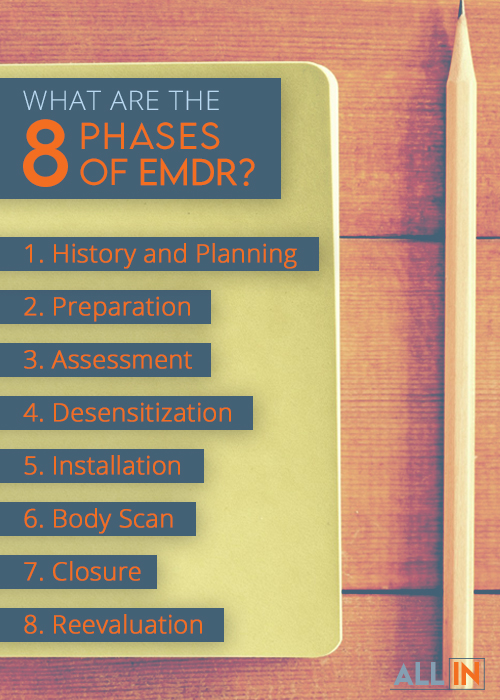 EMDR is broken down into 8 phases.

The 8 phases of EMDR are:

In this phase, the client and the therapist identify underlying traumatic memories that have not been fully resolved and still negatively impact the client’s life.

A client will identify a “touchstone memory” or the beginning of the traumatic chain of memories that still plague the client. The client and the therapist will also devise a plan for the EMDR therapy that will be used to guide both the therapist and the client toward the desired result.

This phase of treatment involves providing the client with the skills, insights, tools, and techniques needed to assist the client in the reprocessing. This often involves emotional regulation skill building, psychotherapeutic tools, and general psychoeducation.

Also during this phase, the EMDR therapist explains how the rest of treatment will look, how EMDR works, and what the client can expect in future sessions.

During the Assessment phase, the therapist conducts an evaluation to establish a baseline of where the client is currently at. This baseline will be used to measure the overall effectiveness of treatment moving forward.

EMDR therapists will discover underlying negative cognitions (or negative beliefs one has) the severity of the traumatic memory, and the desired outcome and belief the client currently seeks.

During phase 4, the client begins the visualization part of EMDR therapy. Here they recall, as vividly as they can, the traumatic memories they have related to the touchstone memory. This phase is where the client will find physical and psychological resolution to the negative impact the past trauma has had on the client.

This phase is aimed at getting the Subjective Unit of Disturbance Scale (or SUD-scale) down to a 0 from wherever it was during the third phase.

After the traumatic memory has been desensitized, it is crucial that the client replaces the negative cognition with a positive belief. For example, instead of the engrained belief of “I am weak”, here the belief of “I am strong” becomes installed.

This installation allows the client to begin to develop a positive cognition of themselves and what they are capable of.

After the resolution of the initial traumatic memory, the therapist will guide the client to scan their body and see if they feel any residual feelings similar to the disturbing event that they had focused on.

This allows the client to discover other, related, underlying traumatic memories that also requires processing. If memories in this phase are discovered, the client will return to an earlier phase.

When a session is over, this phase allows the client to bring the processing to a sense of completion so that they can leave the session feeling well and stable. Here the client is also provided with some things to expect to experience after session, and between sessions, to assist the client in their overall progress.

This phase is how a EMDR therapist opens up a subsequent session. Here the client and the therapist evaluate the effectiveness and progress of the previous session to determine the direction of that current session.

What can EMDR be used to treat?

EMDR has been shown to be an effective treatment modality for depression, anxiety, obsessive-compulsive disorder, Post-Traumatic Stress Disorder (PTSD), panic disorders, and can even be used to assist couples in their couples therapy goals.

Are there dangers of EMDR?

EMDR is considered to be a generally safe and effective treatment modality. However, as with all approaches to therapy, a participant in EMDR may have negative experiences including dissociation, triggering of past memories, emotional disturbance, flashbacks, hypervigilance, or a resurgence of other mental health symptoms.

It is best to work with a trained EMDR therapist and discuss any concerns or reservations you may have.

Where can I find EMDR therapists?

Faretta, E. (2013). EMDR and cognitive behavioral therapy in the treatment of panic disorder: A comparison. Journal of EMDR Practice and Research, 7(3), 121-133.

Moore, M. V. (2016). Couple therapy when one spouse has cancer: Integration of EMDR and relationship enhancement therapies. Journal of EMDR Practice and Research, 10(3), 208-214.