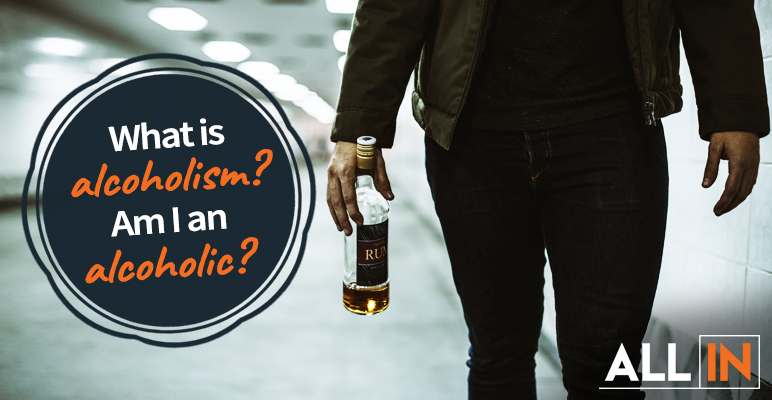 What is Alcoholism? Am I an Alcoholic?

What is alcoholism and how does someone know if they are an alcoholic?

Alcohol abuse and alcoholism are serious concerns. So, it’s important that you equip yourself with the right information.

Below are some of the most common questions asked about consuming alcohol and alcoholism.

(click on the question below to be quickly directed)

What defines alcoholism?
What are the signs of drinking too much alcohol?
Is drinking by yourself a sign of alcoholism?
Is it ok to drink every night?
Can a doctor tell if you drink alcohol?
Am I an alcoholic if I drink a bottle of wine every night?
Why do people get angry when drunk?
Do true feelings come out when drunk?
How does my liver heal after drinking?
Does alcohol cause belly fat?
Why do alcoholics smell so bad?
How does alcoholism affect life expectancy?
What is a Licensed Alcohol and Drug Counselor (LADC)?
Does addiction counseling work?

To some in the Alcoholics Anonymous world, alcoholism is a disease. To others, such as researchers in the journal Alcohol, alcoholism is an inheritable trait activated by internal emotional and psychological struggles.

Broadly speaking, alcoholism can be defined by meeting three criteria:

Defined as a phenomenon of craving, meaning that an individual with an addiction has a mental obsession, meaning the brain is wired in a way that will become obsessed with finding ways to get drunk, and stay drunk.

Simply put, once alcohol is ingested the alcoholic is not able to stop using. They mind and body have an adverse allergic reaction that makes it nearly impossible to stop drinking. It leaves the alcoholic “wanting more.”

In short, the spiritual malady is the feeling often described as having a void that can never seem to be filled, without the use of chemicals.

What are the signs of drinking too much alcohol?

If you find yourself struggling to stop drinking when you have commitments, engagements, or drinking in social situations where it may not be acceptable this could be a sign of issues with drinking.

Furthermore, if you find yourself not being able to stop drinking, despite several attempts there is a good chance that you may have a substance use disorder and should speak to a medical professional for further evaluation.

You may also consider reading this website from the National Institute on Alcohol Abuse and Alcoholism for more signs and symptoms.

It may be, but it is important to understand your drinking in context according to research in the Contemporary Directions of Psychological Science. Drinking is a problem if it causes trouble in your relationships, in school, in social activities, or in how you think and feel. If you are concerned that you might have a drinking problem, consult your personal health care provider.

Is it ok to drink every night?

According to the Centers for Disease Control, moderate alcohol consumption is defined as having up to 1 drink per day for women and up to 2 drinks per day for men. This definition refers to the amount consumed on any single day and is not intended as an average over several days.

However, the Dietary Guidelines do not recommend that people who do not drink alcohol start drinking for any reason.

Can a doctor tell if you drink alcohol?

Yes, Excessive drinking both in the form of heavy drinking or binge drinking, increase the risk of numerous health problems, including:

● Violence, such as child maltreatment, homicide, and suicide.

● Harm to a developing fetus if a woman drinks while pregnant, such as fetal alcohol spectrum disorders.

Am I an alcoholic if I drink a bottle of wine every night?

A standard drink is 5 ounces of wine (12% alcohol content) according to the Centers of Disease Control. The recommended daily consumption per the CDC is 1 drink for women, and 2 for men. A standard bottle of wine is 25oz.

A bottle of wine is well over the recommended amount of alcohol per night, and is a sign of problematic drinking patterns. It does not necessarily mean you are an alcoholic, but you likely have problems with alcohol.

Why do people get angry when drunk?

Not everyone gets angry when they drink. However, as researchers in the journal Cognitive Therapy and Research point out, frequent drinkers tend to do what they call “angry rumination” or thinking anger-inducing thoughts.

These frequent negative thought patterns also lead to unnecessary and excessive amounts of anger, both when drunk and when sober.

Do true feelings come out when drunk?

Oftentimes the barriers that might stop someone from sharing feelings sober are in a sense block, and there is no “filter” to stop the thoughts. Other side effects of a CNS depressant can be found below.

How does my liver heal after drinking?

The liver is one of the only organs that can heal itself. Also, there are methods of treatment for Alcoholic Liver Disease. However, long term drinking can damage the liver beyond repair. If you are concerned about the effect of you drinking on your liver, it’s highly recommended that you speak with your doctor.

Does alcohol cause belly fat?

Yes, depending on amounts and types. Alcohol can be high in calories if drinking beer, and if drinking harder alcohol there can also be a lot of sugar added. Both of which can impact belly fat. High levels of fructose and glucose are well known to cause added fat.

In a study in the journal Nutrients looked at the effects of fructose-containing-sugars on the body. They reported, “The cohort increased their caloric consumption by 355 kcal and gained, on average, approximately two and one-half pounds over the 10-week trial, indicating the difficulty many individuals experienced in incorporating these levels of added sugars into their diet. Whether these findings would persist in a longer trial remains to be determined by future research.”

This was not done with alcohol, however specify focused on fructose intake. In combination with the caloric intake of alcohol, it should provide a small snapshot of the effect it has.

Why do alcoholics smell so bad?

Since alcohol is seen by the human body as a toxin or poison, the brain sends a message to the liver to get to work, and treat it as such. Thus, the alcohol is absorbed in the bloodstream, and takes about an hour to metabolize.

Alcoholics drink more than a drink per hour. Therefore, the boozy smell could be linked to this.

In later stage alcoholism, an individual focuses less on hygiene. So, a bad smell could also be related to a lack of motivation or energy it would take to do daily hygiene.

How does alcoholism affect life expectancy?

The simple answer is yes. There are several chronic diseases that have been known to have a correlation with alcohol use. Most notably in a Report on Carcinogens, the National Toxicology Program of the US Department of Health and Human Services lists alcoholic beverages as a known human carcinogen. The research evidence indicates that the more alcohol a person drinks—particularly the more alcohol a person drinks regularly over time—the higher his or her risk of developing cancer.

Scientists with the Hazeldon Betty Ford Foundation believe that alcohol is converted into acetaldehyde, a potential carcinogen. Cancer of the mouth, throat, esophagus, liver, colorectal region, and breast have all been linked to heavy alcohol use.”

Likely the most common disease associated with alcoholism is Cirrhosis of the liver. The liver serves as the primary filtration system for the human body. Heavy drinking over a sustained period will affect the functioning by dehydrating and scaring the liver.

Some common signs and symptoms of cirrhosis include fatigue, itchy skin, weight loss, nausea, yellow eyes and skin, abdominal pain and swelling or bruising. Advanced cirrhosis can be life-threatening.

For these reasons alone, it is important to treat alcoholism as a serious public health matter.

What is a Licensed Alcohol and Drug Counselor (LADC)?

A Licensed Alcohol and Drug Counselor (LADC) is an individual that has sought a degree to specify work with others affected by addiction. Some states have different requirements. However, most will require a full 60 credits. This is a combination of course work, and supervised clinical hours.

In the state of Minnesota Board of Behavioral Health and Therapy, an LADC will need to complete 880 hours supervised clinical work, and an additional 30 hours with the adolescent population if they chose to work with anyone under the age of 18.

An LADC may work in treatment programs, hospitals, community clinics, and even public institutions such as Colleges and Departments of Health. Working with an LADC usually complements your individual therapy.

Addiction counseling is effective. However, the individual must also demonstrate investment in getting well. In one study about treatment outcomes, the researchers looked at the correlation between short term sobriety (6 months) and long term (5 years).

A Comprehensive list of support groups in Minnesota can be found here.

If you are interested in making an appointment with an addictions specialist, you are welcome to consider the providers at ALL IN.

Should you go sober? Consider reading to decide your yourself.

Creswell, K. G. (2020). Drinking Together and Drinking Alone: A Social-Contextual Framework for Examining Risk for Alcohol Use Disorder. Current Directions in Psychological Science, 0963721420969406.

Filed under: Drug & Alcohol Addiction by All in therapy Clinic

What Type of People Become..

5 Signs Your Spouse Is..