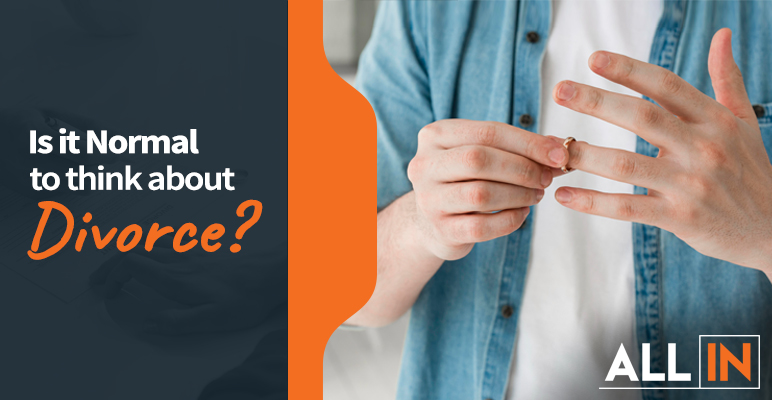 Is it Normal to Think about Divorce?

Yes, it is normal to think about divorce. If you or your partner have had thoughts of divorce but are not ready to leave the relationship it may be worth talking to a couples therapist to explore what is fueling these thoughts.

Is it normal to think about divorce?
What are the main causes of divorce?
Is divorce better than an unhappy marriage?
What impact does divorce have on children?
Why do unhappy couples stay married?
Do people regret divorce?
What do I do if my spouse wants a divorce and I don’t?
What year of marriage is divorce most common?
When is divorce a good idea?

Is it normal to think about divorce?

Yes, it is normal to think about divorce. An article in Family Process reported that 10% of married adults in Nebraska had thought about a divorce in the past two years.

This same study found that most people who thought about divorce were what they called “soft thinkers;” meaning that they thought about it less frequently and reported more hope and fewer problems in their relationship.

If you or your partner have had thoughts of divorce but are not ready to leave the relationship it may be worth talking to a couples therapist to explore what is fueling these thoughts.

What are the main causes of divorce?

An article in the Journal of Marriage and Family outlines a variety of factors that have been linked to divorce. Some of these risk factors are ones that you have no control over, such as being poor, experiencing unemployment, or having parents that are divorced.

It is thought that factors such as lower income and unemployment lead to an increased level of stress, which has been shown to make couples less happy over time. Another factor that can increase the risk of divorce is having been previously married.

One school of thought is that as we cannot divorce ourselves, so we bring whatever issues we had from our first marriage to our second- that is unless we seek out help to address those issues.

Other common relationship issues that can lead to divorce include domestic violence, frequent conflict, infidelity/cheating, the number relationship problems, weaker commitment, and lower levels of love and trust between spouses.

However, the article also stated that it is not just having one or two risk factors, rather that the risk factors are cumulative and typically lead to divorce through high levels of conflict and unhappiness, and low levels of commitment.

Is divorce better than an unhappy marriage?

Unfortunately, like most of life there are no hard and fast rules for if divorce is a better option than staying in your marriage. A variety of factors are thought to contribute to how someone adjusts after a divorce.

Researchers at the University of Nebraska and Pennsylvania State University found that having a higher income, dating someone (or remarriage), positive attitudes about divorce (prior to having gotten one), and being the partner who initiated the divorce were linked to better adjustment.

There are a variety of ways to be unhappy in your marriage and unhappy divorce, due to that it is not possible to say which option is better.

One thing you can think about is how much hope and love there is in your marriage. If there is a some amount of hope and love it might be worth considering couples counseling as a way to address issues you are experiencing.

What impact does divorce have on children?

For most children, the impact of divorce will be negative. Numerous studies have demonstrated that children of divorce, overall, do worse in general life happiness markers. They are less likely to marry, are more likely to experience poverty, have issues with the legal system, experience mental health issues, and have difficulty succeeding in school. This, of course, depends on a lot of factors, including how the divorcing parents handle co-parenting, and the overall mental and emotional health of the children prior to divorce.

Historically, it has been thought that divorce was always bad for children. However, a well-known study on this topic by a researcher at Pennsylvania State University found that in some cases divorce can actually be good for children. He found that when parents were had high-conflict marriages or there was violence in the relationship the children often did better if their parents divorced.

If you are considering divorce and have children, it may be helpful to check in with a therapist and talk about concerns and how you might ease the transition for your children if you decide to move forward with ending your relationship.

Why do unhappy couples stay married?

For instance, this could mean that due to unemployment or other financial issues it is financially easier or more beneficial to stay married than get divorced.

Additionally, as the researcher from Pennsylvania State University outlined, couples that are not completely unhappy in a marriage, are lower in conflict and still enjoy spending time with each other, so they may choose to stay in the relationship for their children.

People may also choose to stay out of problematic codependency.

If you are unsure if it would be better to stay or leave your marriage it may be helpful to talk to a good friend, family member, or seek out a therapist to explore the costs and benefits to each option. 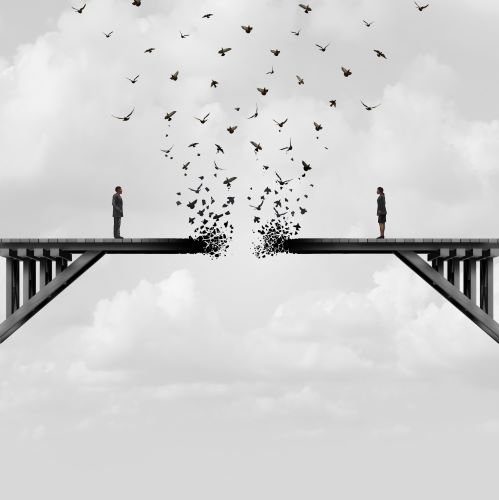 Sure, regret is a possibility with almost any decision. An article published in Family Court Review looked at over 300 matched couples who were filing for divorce and had completed a parenting course. These researchers found 1 in 10 couples were interested in reconciliation.

While a study in the Journal of Divorce and Remarriage found that as high as half of divorced individuals wish they had worked harder to address differences in their marriage. Given this information it is important that remember that if you have thoughts of divorce, or even if you have started divorce proceedings, you can always seek out help to try and reconcile with your partner.

What do I do if my spouse wants a divorce and I don’t?

That is not an uncommon problem. A well-known researcher and clinician, Dr. Bill Doherty, created a clinical intervention for what he called “mixed agenda” couples, where one person wants a divorce and the other does not.

The purpose of this process, called discernment counseling, it to increase each partners clarity and confidence about the next step (things staying the same, divorce, or committing to 6 months of couples therapy- with divorce off the table).

The process is brief, lasting fewer than 6 sessions typically. There are a variety of clinicians that have been trained in this process and you can find one near you here.

What year of marriage is divorce most common?

Anecdotally and through research we know that there is a graduate decline in how happy couples are after the so-called “honeymoon” period. A paper published in the journal Demography found that the risk of divorce gradually increased over the first three years of marriage, and peaked at year five.

Research in the journal of Personal Relationships states that couples often experience a significant decrease in how happy they are in their relationship while raising children, which can add up over time and is thought to be why couples with teenagers experience a high rate of divorce.

Researchers in The Journals of Gerontology also highlight that there is a rise in divorce among adults who are over 50 years old. It is possible that the transition to parenthood/adolescents and transition to retirement may be fueling the divorce rates for parents and older adults.

If you are approaching a time of transition it may be a good time to focus on your individual mental health and your relationship health.

When is divorce a good idea?

Again, it is hard to say for sure when divorce is a good idea for someone. Some of what we do know form an article in the Journal of Divorce and Remarriage is that when people reported the reason for ending their marriage was related to physical violence, addiction, or infidelity, they were less likely to think the marriage could have been saved.

Talking with a therapist individually or exploring discernment counseling may help you determine if divorce is a good option for you.